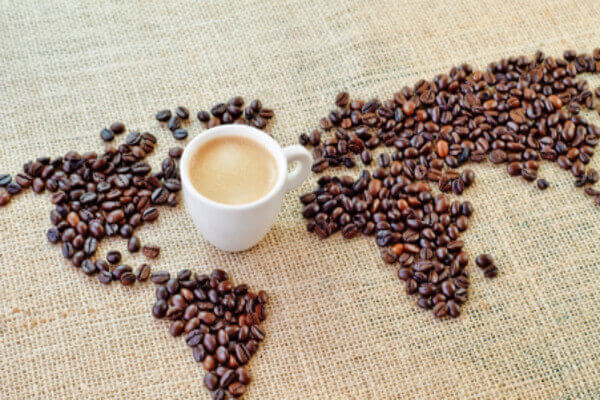 1 In 1675 the British monarch Charles II closed all cafes in England because he believed that citizens gathered against him. The example of the king was repeatedly followed by other world monarchs.

2 70% of coffee drinkers drink Arabica, which has a pleasant, mild taste, and 30% – “Robusta”, which tastes bitter, and has half the caffeine in it. “Robusta” is a lower-class variety, but it is more resistant to drought, disease, and you can harvest twice as much. Arabica has about 1% caffeine, Robusta has 2%. Manufacturers of instant coffee mainly mix “Robusta” and “Arabica”.

3 The height of the coffee tree is a little more than 9 m. But because it is more convenient to collect fruit from lower trees, now the height of coffee trees rarely exceeds 3 m.

5 The coffee bean is inside the red berry.

6 Green (unroasted) beans can be stored for up to a year in a cool dry place without losing their flavor. After the coffee beans are roasted, their properties begin to disappear after about two days.

7 Americano coffee appeared during World War II. Soldiers from America could not drink European strong coffee and were asked to dilute it with water.

8 Espresso does not contain as much caffeine as coffee, prepared in a “drop” way. Prepare “Espresso” quickly, passing water under high pressure through the ground grains. As the contact of water and coffee decreases, the caffeine in the cup of “Espresso” will be less.

9 In countries where coffee is grown, it is still harvested by hand. An experienced collector can collect up to 7 baskets of beans a day, each weighing up to 100 kg. Payment for this work – from $ 2 to $ 10 per basket. After the grains are dried and fried, the price of the basket will increase to $ 110.

10 Finland consumes the most coffee, with an average of five cups of coffee per adult per day.

11 October 1 is Coffee Day in Japan. This country ranks third in the world in terms of coffee consumption per capita.

13 Instant coffee was invented in 1906 by a Belgian named George Washington.

14 Coffee ranks second in the world ranking of best-selling products. In the first position – oil.

15 Coffee as a beverage has been around for over 700 years.

16 A cup of black coffee without sugar has zero calories.

17 One cup of coffee is 300 antioxidants that stay in the body for a month.

18 Caffeine is a substance banned by the International Olympic Committee. If the control of the athlete’s urine reveals a content of more than 12 micrograms of caffeine per liter, it will be removed from the competition.

19 Caffeine enhances the action of aspirin and paracetamol. After a cup of coffee, the acidity increases and the stomach accepts and dissolves painkillers more willingly.

20 The word “cappuccino” is the result of several confusions of languages ​​and it refers to the Capuchin monks. Capuccio – from the “hood” – is an item of clothing for a monk. The first documented mention of the term “cappuccino” in relation to coffee is 1948, a book about San Francisco. But what is the connection between coffee and monks? Coffee is as dark as a monk’s clothes, and the “cap” of whipped cream resembles the color of his hair.

21 Earlier, Turkish men promised during the engagement ceremony that their wives would be provided with coffee, and failure to fulfill the vow could be a reason for divorce.

22 Coffee lovers are much less likely to visit the dentist. The elements contained in this drink do not allow bacteria to settle on tooth enamel.

24 The first coffee shop in Paris opened in 1689 and was called Procope. It was owned by Francois Procope, a lemonade dealer. It was located opposite the theater, and its main visitors were representatives of bohemia – artists and painters.

25 In Italy, coffee was first learned in 1615, and in 1720, in the city of Venice on St. Mark’s Square opened the world-famous cafe “Florian”, visited by Goethe, Casanova and Rubinstein, and cafe “Guardia”, which was visited by Liszt and Byron.

26 The first coffee shop in Vienna was opened by a Pole Kolzhitsky. He was a true fan of coffee and managed to save more than one bag of coffee beans when leaving the city, the Turks set it on fire. It was thanks to the Turks that the Austrians learned in 1683 how to really cheer up.

27In Bedouin houses, coffee is usually made with ginger or cardamom, as a result of which it turns yellow and has a very pleasant taste. At the same time, it is traditionally served to the guest with the words “My home is your home.”

28In Uganda, green coffee beans are mixed with spices and sweet herbs, dried, and hung in bags around the house as decoration and mascot.

29 Italians drink coffee with sugar, Mexicans – with cinnamon, Germans and Swiss – with hot chocolate, Belgians – with a snack with chocolate. Ethiopians add salt to coffee and Moroccans add pepper. In the Middle East, cardamom or other spices are often added to coffee. The Egyptians prefer “pure” strong coffee, adding sugar, milk, cream, cardamom if desired.