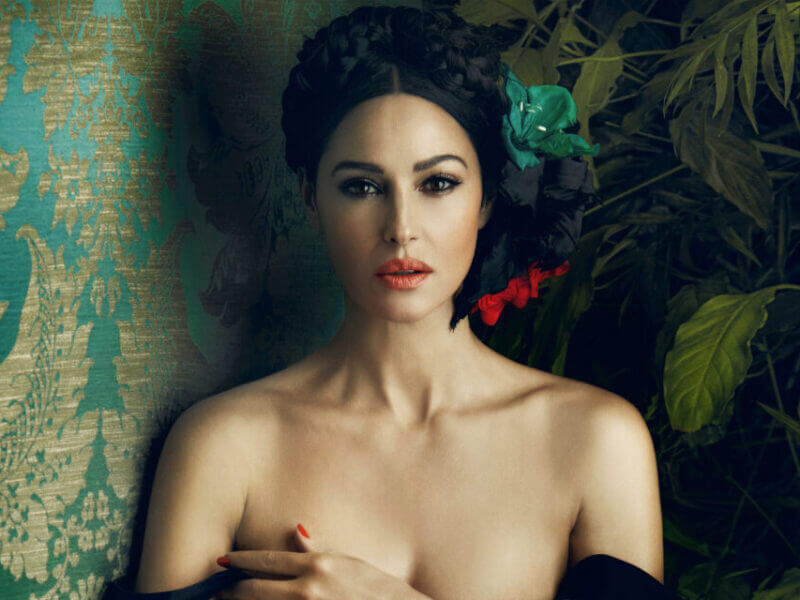 Lesson 1. In any incomprehensible situation – paint your lips

In an interview, Monica enthusiastically says that her grandmother painted her lips with red lipstick, even going to church services on Sundays. It was part of her essence, femininity, and Italian temperament. Growing up with such an example before her eyes, Monica herself made red lips part of her image.

A bright Italian woman with dark eyebrows, thick eyelashes, and perfect skin could do without make-up at all, but admits that cosmetics act as a kind of “armor” for her – without her she feels vulnerable.

Lesson 2. Be a cat that walks on its own

I became independent very early and I don’t even know what it’s like to ask my husband for something. I can count on myself, and it’s important to me. “Dependent” in Italian will be “mantenuta”, literally “the one held in the hand”. And I don’t want anyone to hold me in their hand.

Monica flew out of her parents’ nest early – after school, she entered law school, and to pay for tuition, she worked as a waitress and model. It was the modeling business that gave birth to Bellucci’s worldwide popularity – the covers of Elle and Vogue, long-term friendship with Dolce & Gabbana and Dior, first invitations, and high-profile roles in movies.

In 1996, while filming, Monica met Vincent Cassel – they lived together for 19 years, of which 14 years – in a formal marriage. At the same time, their union has always been a “guest” – the actors almost did not live together, we’re on set in different parts of the world.

In 2013, Monica and Vincent divorced by joint decision: “When people divorce, it is always a tragedy. At the same time, if they stay together, it could be an even worse tragedy. ”

Lesson 3. Don’t be ashamed of your sexuality

I do not understand women who say that male desire humiliates them. In my opinion, they are simply not in harmony with themselves.

Monica Bellucci’s image is not a doll’s face and seductive forms, it is the energy of sexuality, femininity, and harmony with herself that she transmits. After all, many were lucky in the genetic lottery, but the dream of millions of men on both sides of the Atlantic was only Monica.

Bellucci was 40 years old when she officially received the title of Most Desirable Woman in the World – according to a large-scale poll of men’s opinion. She became the only mature “Bond woman” and is still shamelessly filmed in intimate scenes, proving that sex has no age. To the question “what is your beauty secret?” Monica answers briefly: “Men”.

I will never be skinny. I am quite lazy by nature. I like to eat. I’m real – like this. And I do not intend to become false.

On the one hand, it’s easy to be yourself when you look like Monica Bellucci. On the other hand – this advice from the actress is perfect for all of us. Let’s learn to love our bodies. Monica never lost weight, did not recover, and did not do plastic surgery for the sake of roles or for the sake of men.

Monica’s parameters in her model youth were 94-64-92, height 171, weight 63-64, she has 41 leg sizes. But such “non-standard” and insufficient fragility never confused her. And only after the birth of her second daughter at the age of 46, Bellucci, by her own admission, became “more careful in eating.” But at the same time, he always treats himself without excessive severity and with humor: “Instead of going to the gym, I wear black – it’s much more practical and enjoyable.”

Love makes us beautiful. And the greatest love in a woman’s life is her children.

After her divorce from Vincent Cassel, the media hunted for Monica – everyone wanted to know who would fill the vacancy next to the beauty. But Bellucci does not flaunt his personal life. And only in 2018, she was caught kissing French artist Nicolas Lefebvre. He was 18 years younger than the actress and became the first “official man” with whom Monica was born after parting with Kassel. But, unfortunately, a year later the couple announced their separation.

Monica always speaks restrainedly and delicately about the role of men in her life and considers her daughters Virgo and Leon to be her main love.

The “late” children were her conscious decision – Bellucci wanted to realize her career first, and then dedicate herself completely to motherhood. And today this role has become the main one for her. “In my old age, I’d rather watch my children than watch my movies,” Monica admits.