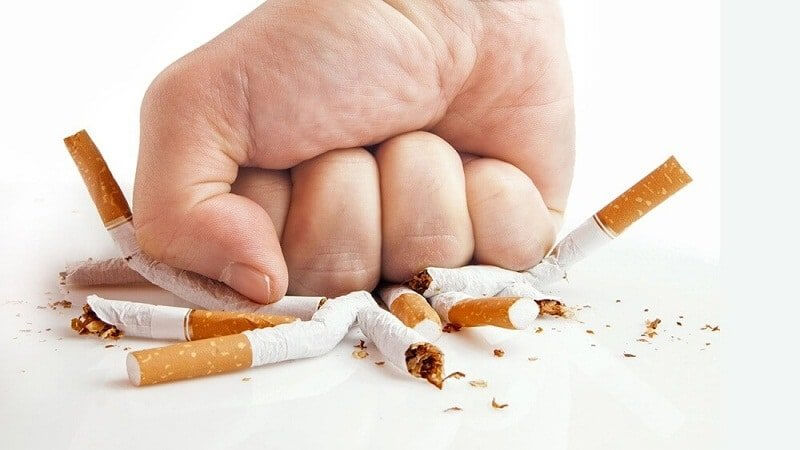 Quitting smoking is probably one of the hardest things you can do as a smoker.

But, the benefits cover all the difficulties you may face when trying to quit smoking. Here are 9 motivational facts to help you get rid of this bad habit.

1. The health benefits begin as soon as you put out your last cigarette. After 20 minutes, blood pressure and heart rate return to normal. The risk of having a heart attack is reduced by a third. After 48 hours from the last cigarette smoked, the body is completely cleansed of carbon monoxide and nicotine. The lungs begin to clear of mucus and other effects of inhaling tobacco smoke, and the sense of smell and taste improve. By the end of the first year without cigarettes, your blood circulation will improve, lung function will be restored by 10%, and most breathing problems will disappear. In addition, the risk of having a heart attack is reduced by 50% compared to a smoker. After ten years, the risk of developing lung cancer is reduced by 50%, and after fifteen years, the risk of heart disease can be compared with the risk of a person who has never smoked.

2. Quit smoking profitably. The financial benefits of quitting smoking are quite high and will be even greater in the long run, as the state regulates the market for tobacco products, and the framework of anti-smoking programs will further increase the cost of a pack of cigarettes. For example, if a pack of cigarettes costs 35 hryvnias, and you smoke exactly a pack a day, simple arithmetic suggests that you give 12,775 hryvnias a year out of your own pocket, and instead receive a whole set of “gifts”: shortness of breath, yellow complexion, cough, increased risk of cancer and shortening of life by 10-15 years. Isn’t it too expensive for such a list of “souvenirs”?

3. Smoking can prevent even conceiving a child, not to mention giving birth to a healthy one. Ideally, a woman’s body should be clean and free of nicotine for at least a month before becoming pregnant. And smoking during pregnancy is simply dangerous. Nicotine can cause fetal death caused by premature placental abruption. It can also lead to the death of the mother. Nicotine causes vasoconstriction, which threatens the lack of oxygen and nutrients needed for normal fetal development. Other problems include underweight newborns, developmental delays, and leukemia. Maternal smoking is also cited as one of the causes of Sudden Infant Death Syndrome (SIDS) in newborns. In men, nicotine also affects the ability to leave offspring – the probability of conceiving a child is reduced by 3-4 times compared with non-smokers, due to reduced sperm activity. Narrowing of blood vessels disrupts normal blood circulation in the prostate gland, leading to impotence and adenoma. Adenoma, in turn, is the first sign of the possible development of prostate cancer.

4. Prolonged smoking leads to the so-called “smoker’s face”. Symptoms: deep wrinkles, sagging skin. Due to a lack of oxygen in the blood, red, purple, and orange spots may appear on the skin. Smoking prevents the regeneration of skin cells, so wound healing, for example, can take longer, while leaving more noticeable scars. It has been established that smoking is one of the factors that provoke the development of carcinoma – a type of cancer that affects the epithelial cells of the skin.

5. It becomes much easier for non-smokers to travel. Most airports around the world have banned smoking in departure areas. Given the long queues in the review areas, and running out to smoke, you really run the risk of being late for your plane. Moreover, being on a plane, train, or bus where smoking is prohibited, it will be much harder for you to endure a long trip if you smoke.

6. Control your life yourself, instead of letting cigarettes dictate your rules. Virtually no one likes it when they are told how to act, what to do and how to live, but cigarettes just keep the smoker in check – “Enough work – go smoking. Enough to communicate with friends – go out smoking. Enough enjoying food – stairs smoke “. Cigarettes, like a parasite, begin to control your life, even significantly reducing it.

7. Smokers set a bad example for their children and their friends. Parents constantly tell their children not to smoke for anything, but they themselves smoke like steam locomotives. The younger a person starts smoking, the stronger the destructive effects on his DNA. The teenager’s body is still developing and growing, and cigarette smoking directly affects the ability of cells to recover.

8. Smoking with alcohol is a deadly combination. The combination of nicotine with alcohol at times increases the harmful effects on the body. For alcoholics who are trying to get drunk, cigarettes can significantly reduce their chances of success. 80-95% of alcoholics smoke. To successfully deal with one bad habit, it is better to tie with both at once.

9. Smoking poses numerous dangers to children’s health. About pregnancy and smoking we are in said above, but add that if a woman smokes during pregnancy, her children will be more prone to allergies and asthma attacks. If a small child picks up a cigarette butt and starts chewing it, the nicotine left in the filter may be enough to cause its death.

Tobacco cultivation provokes deforestation and is the cause of nicotine poisoning among the population employed in the tobacco industry, especially in poor countries. Burning tobacco releases about 4,000 chemical compounds, including carcinogens, toxic substances, and toxic gases. Speaking of the disposal of millions of cigarette butts, it should be noted that many cigarette butts enter the water system, poisoning it.

You can quit smoking, stay cheerful, make plans, and manage your own life. As Allen Carr said, you don’t have to smoke a cigarette to enjoy the taste of coffee or enjoy socializing with friends. You do not need yellow skin, bad breath, black teeth, shortness of breath, cough, or hair that constantly smells of cigarette smoke. You do not need cigarettes to enjoy life to the fullest.