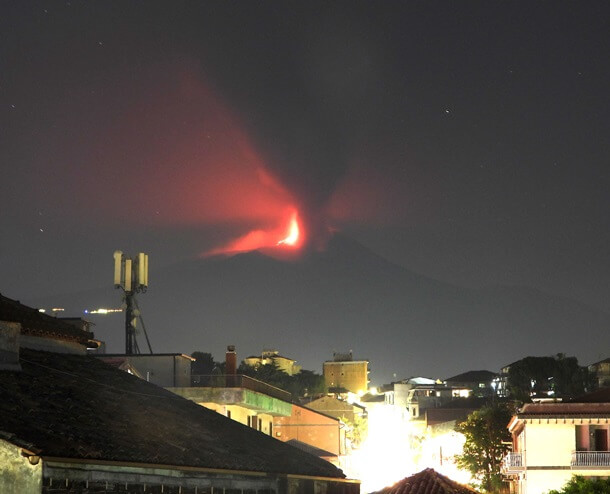 Mount Etna, located in northeastern Sicily, woke up again. Its activity is observed for several days. But recent emissions since last night have shut down Catania Airport, the island’s second-largest city.

The entire runway of the airport was covered with ashes. In this regard, it was closed. Etna stratovolcano is called the most active in Europe. During the last eruption, he threw into the sky a pillar of ash about 5 kilometers high according to the site Volcano Discovery, during the last peak activity of Mount Etna, which was observed on the night of 6 to 7 July, after a phase of intense eruptions around midnight, the volcano gradually moved to a lava fountain. It reached a height of several hundred meters.

Experts predict the next “peak” activity of Etna on July 9. Mankind is aware of 200 small-tailed eruptions of Mount Etna. There is information that the volcano erupted lava in 1226 BC. e. This is the first message. Etna can be called unique for Europe. The volcano itself is located on the east coast of Sicily, near Messina and Catania.

Outside the Caucasus Mountains, the Alps, and the Pyrenees, Mount Etna is the highest point in Europe. The height of the volcano is constantly changing. Eruptions both increase and decrease it. For example, the volcano is now 21.6 m lower than it was in 1865. According to the latest data, its height is 3329 m above sea level.