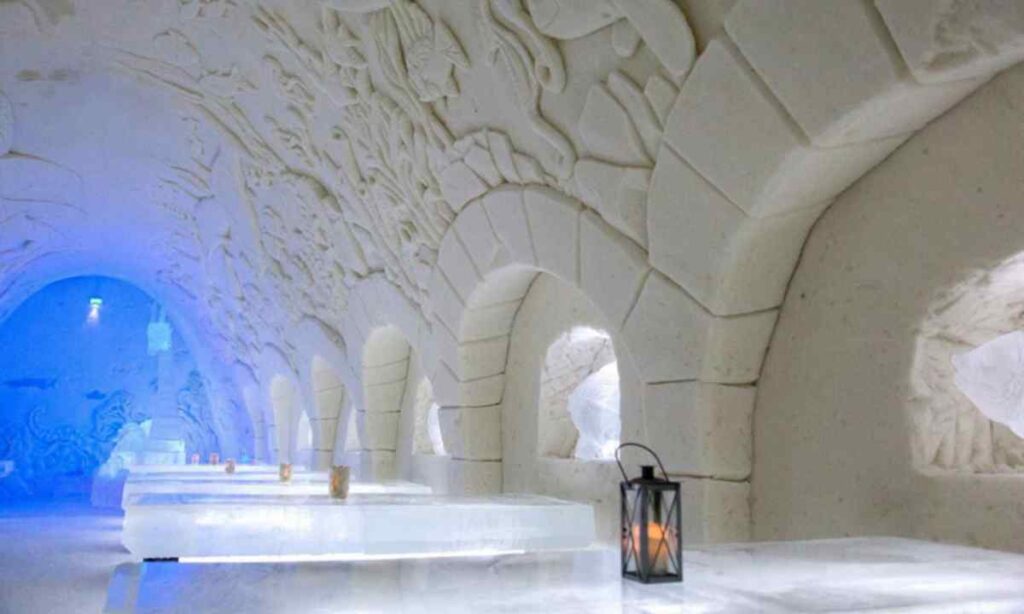 Staying in a hotel made of snow and ice is the same extreme winter entertainment as snowboarding, swimming in a hole, or sledding. RBC Style has learned where to stay for the night in the icy devils and how much it will cost.

The Icehotel in Yukkas’ Järvi, 200 km north of the Arctic Circle, has existed since 1989. However, all this time it was seasonal: the hotel was built in late autumn, and in the spring it melted. In November of this year, the Icehotel 365 opened, where you can stay overnight in winter and summer. It is located in the building of the former ice warehouse, and the installation that cools its premises is powered by solar energy.

The furniture and interior of the Icehotel 365 are made of snow and ice, and were designed by artists: for example, the Victorian-style room was designed by Norwegian-Italian architect Luca Roncoroni. Twenty rooms at the Icehotel 365 have a temperature of -5 ºC and are provided with fur skins and insulated sleeping bags to keep guests awake at night. In the same hotel, there are both ordinary rooms, and managers of Icehotel 365 recommend guests to alternate nights in cold and warm rooms.

You can also try very cold champagne at the Icebar Bar and admire the ice art in a special art gallery. The cost of a double room is $ 219. Next to the year-round ice hotel will traditionally be built and seasonal with an additional 35 rooms.

The hotel is 200 km north of the Arctic Circle and 45 km from Levi Ski Resort. There are 26 rooms made of snow and ice, and guests are provided with warm sleeping bags and a hot berry drink in the morning. The ice bar serves local cuisine prepared with local ingredients. The only inconvenience is the lack of bathrooms in the rooms: guests have to take a shower in a separate but warm house. The cost of a double room depends on the date of stay – for example, at the end of January, it can be booked for $ 250.

The Snow Hotel is located in the Lumilinna Snow Castle and looks truly fabulous: its rooms are decorated with snow sculptures of trolls, princesses, and animals, as well as ice carvings. The hotel has 21 rooms, each of which has a temperature of -5. In addition to the ice restaurant Snow Restaurant & Bar, there is also a snow chapel, where wedding ceremonies are held. Spend the night in a suite with a sheepskin double bed for $ 386.

This seasonal ice hotel, located 19 km from Alta in northern Norway, resembles Eskimo needle accommodation. There are 30 rooms with temperatures from -4 to -7, and although guests are provided with fur skins and sleeping bags, it is not forbidden to come here with their blankets. The rooms are located opposite each other in a long snow corridor, and some of them have fireplaces, though electric. You can warm up in one of the two saunas or hot tubs, which are located in a separate house. A night in the ice halls will cost $ 532.

In Switzerland, there is a whole network of ice hotels Iglu-Dorf, which are built annually in Zermatt, Gstaad, Davos, and Engelberg. The choice of rooms here is huge – from dormitories for student backpackers to romantic suites with snow-decorated walls and hot baths outside. Especially enthusiastic guests are invited to build their own needles from ice bricks under the sensitive supervision of a personal assistant. The cost of a night in a romantic suite starts from 179 per person. This year, hotels in Gstaad, Davos, and Engelberg will open on December 25 and run until April.