Welcome to the country of pizza, Parmesan, and delicious pasta. Incredible cuisine, hot temperament of Italians, beautiful architecture of old towns, romantic atmosphere of narrow streets and warm beaches of the Mediterranean Sea. What .. welcome and good appetite!

Italy is symbolized by food. Where, if not from this country came everyone’s favorite pizza and pasta, parmesan, and pesto? And this is just a small part of gastronomic fun. Today we offer you a gastronomic guide to Italy – where to taste the best pizza in Italy (and therefore in the world)? In which regions is Carbonara pasta best, and in which Bolognese, where to drink Spritz, and where Chianti?

Do you want to literally taste Italy to the fullest? Follow the guide, choose your favorite regions, or arrange a trip to all regions of the country.

Welcome to the most delicious country, combined with the hot temperament of the Italians, the beautiful architecture of the old towns, the romantic atmosphere of the narrow streets, and the hot beaches of the Mediterranean. What .. welcome and good appetite!

This delicious creamy rice dish originates from northern Italy and is made from fried rice with butter, onions, and broth. Risotto can be prepared with a variety of ingredients – seafood, mushrooms, meat. However, while in Milan, you should try Risotto Alla Milanese, cooked in meat broth with bone marrow, cheese, and saffron.

Where to taste? In Milan, visit the Trattoria Masuelli San Marco, which has been preparing Milan risotto according to a traditional recipe since 1921. 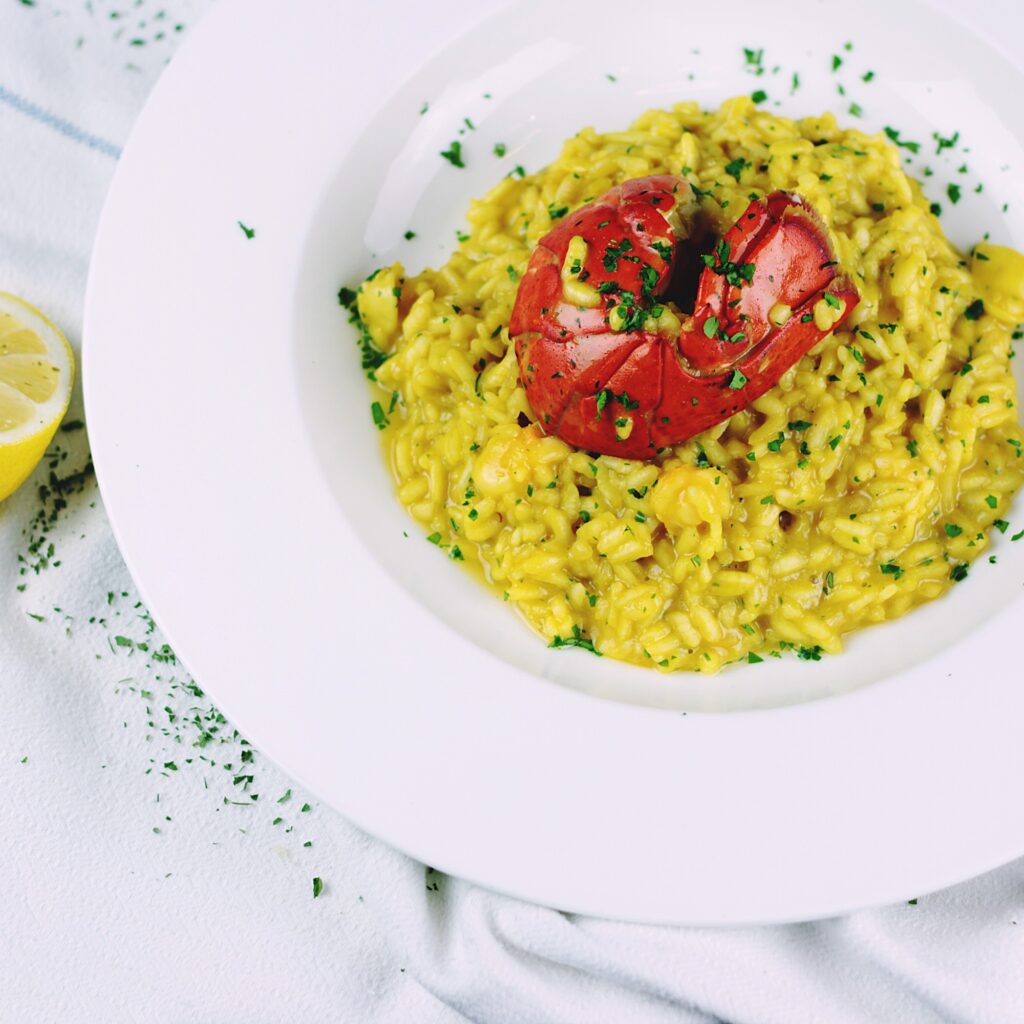 Those who came to Italy to try Spaghetti Bolognese can be disappointed because technically, such a dish does not exist! What we used to call Spaghetti Bolognese, the Italians call ‘spag bol’, meaning Ragù Alla Bolognese – a meat sauce made with carrots, onions, celery, beef and pork in tomato sauce. And most interestingly, the stew a la Bolognese is never served with spaghetti, only with tagliatelle pasta!

Where to taste? It’s hard to find a bad stew in Bologna, but try going to Trattoria Annamaria, where the sauce is cooked for 8 hours, which guarantees an authentic taste. 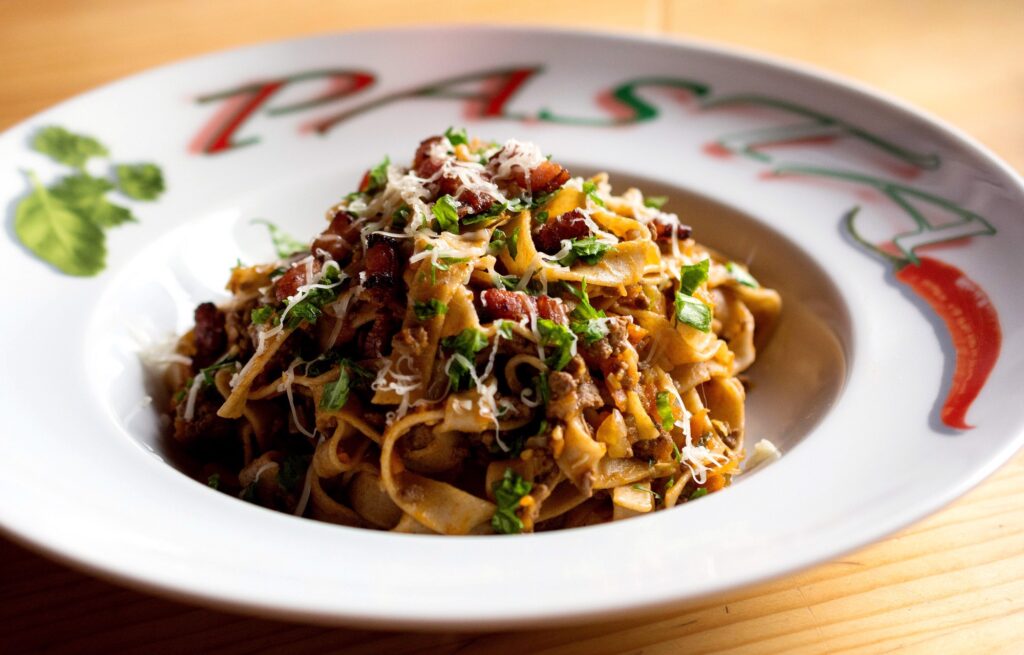 Carbonara pasta is a Roman dish, so the Italian capital is very picky about its preparation. Traditional carbonara is made from simple ingredients – eggs, Pecorino Romano cheese, black pepper, and guanciale – raw pork cheeks, which are often replaced by regular lard. No cream and spices! The mixture of eggs and cheese provides the creamy structure of the dish, and lard – the salinity of the dish. Only long types of pasta are suitable for carbonara – tonnarelli, fettuccine, spaghetti.

The name of the dish comes from the word carbon, which means coal. And all because a lot of black pepper was added to the pasta. Like pizza, carbonara was the food of the poor who ate black bread with lard or leftover pork (cheek) and pepper. And local street vendors have replaced bread with pasta. 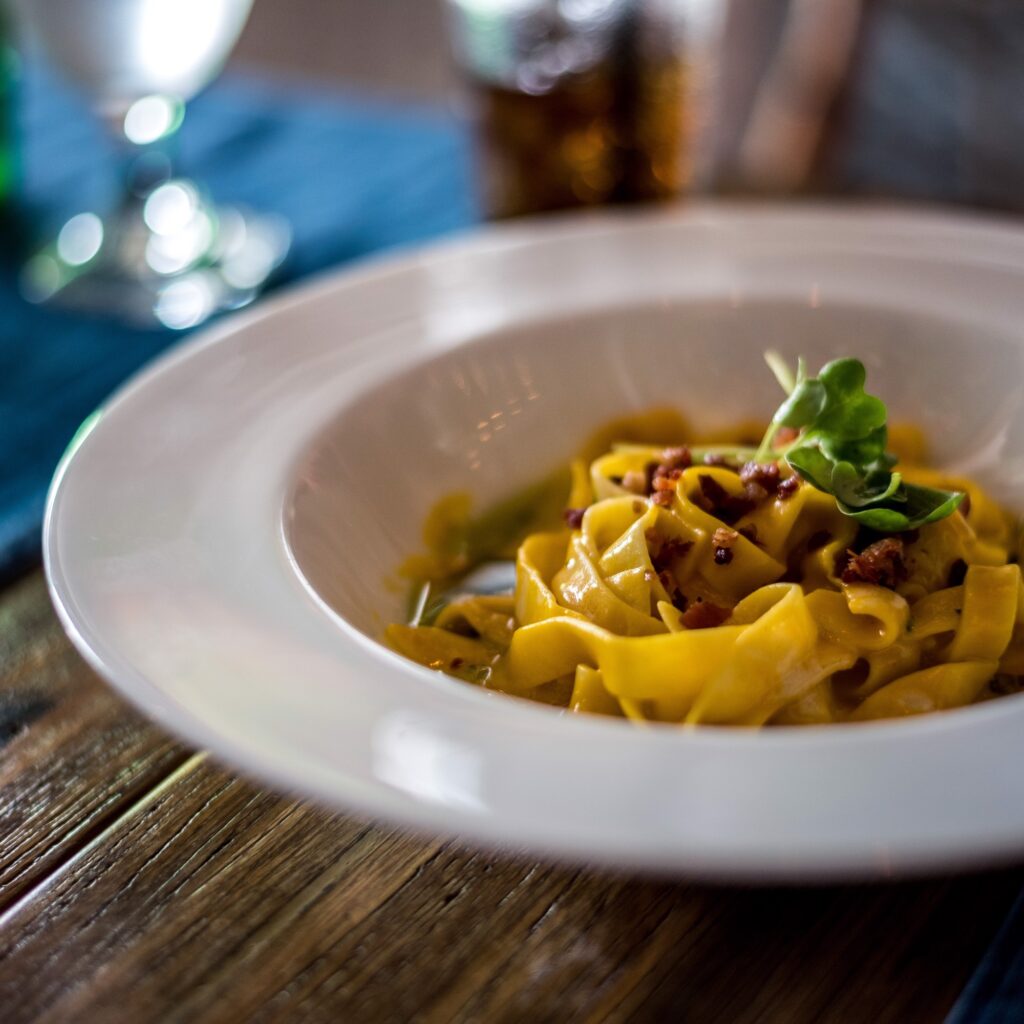 In Italy, you will find pizza everywhere, but the real home of this dish is Naples. And no trip would be complete without tasting authentic Neapolitan pizza. Patriotic Margarita, which consists of three ingredients – fresh mozzarella, tomatoes, and basil – combined in the colors of the Italian flag.

The dough for Neapolitan pizza is formed only by hand, does not use any third-party tools, and pizza is baked for exactly 1 minute at a temperature of 480 degrees.

Where to taste? Visit the restaurant Da Michele, which opened its doors in 1870. It was here that Elizabeth Gilbert tasted pizza and later described it in her book Eat, Pray, Love, and Julia Roberts played her in the film of the same name. Also, a must-see is the Brandi where Pizza Margarita was invented in 1889 in honor of the arrival of Queen Margarita of Savoy. 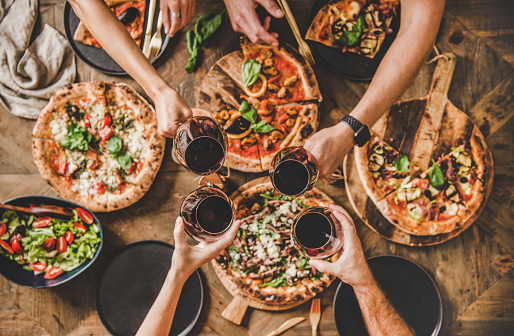 There are various versions of Sicilian canola, which are cooked around the world, but none can be compared with the authentic, cooked in Sicily. These are tubes of crispy dough with sweet ricotta and chocolate chips. They are decorated with candied fruit, chocolate, or pistachios. Canola originated in Palermo during the Arab occupation of Sicily. For a long time they were a seasonal dish and were tasted only during the Sicilian Carnival, but today you can enjoy them at any time of the year. 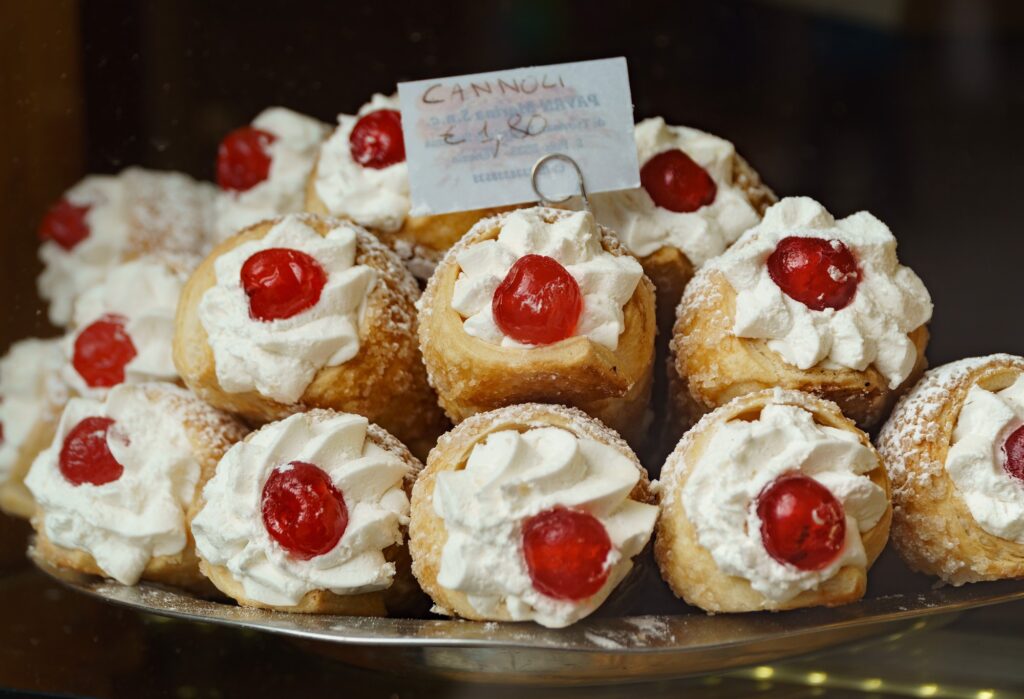 In Sardinia, you should definitely try sides – cakes that taste – the perfect combination of sweet, spicy, and spicy. Served as an aperitif or dessert. These large “ravioli” are made from semolina, topped with pecorino cheese, and generously topped with honey. Sidas come from central Sardinia, where pecorino sheep cheese is very popular, so it is used in a variety of dishes.

Traditional Genoese pesto is a tribute to two wonderful ingredients of the Liguria region – fresh green basil leaves and fragrant olive oil. And if you add garlic, parmesan, pecorino, salt, pine nuts, and a dozen patience to grind it all together, you will get the most delicious Pesto Genovese. Usually, pesto is added to side dishes, salads, sandwiches. But traditionally pesto is a sauce only for pasta. In Italy, there are two words that translate as a sauce – sugo and salsa. Sugo is a pasta sauce, and salsa can be added to any dish. So, pesto is a sugo. 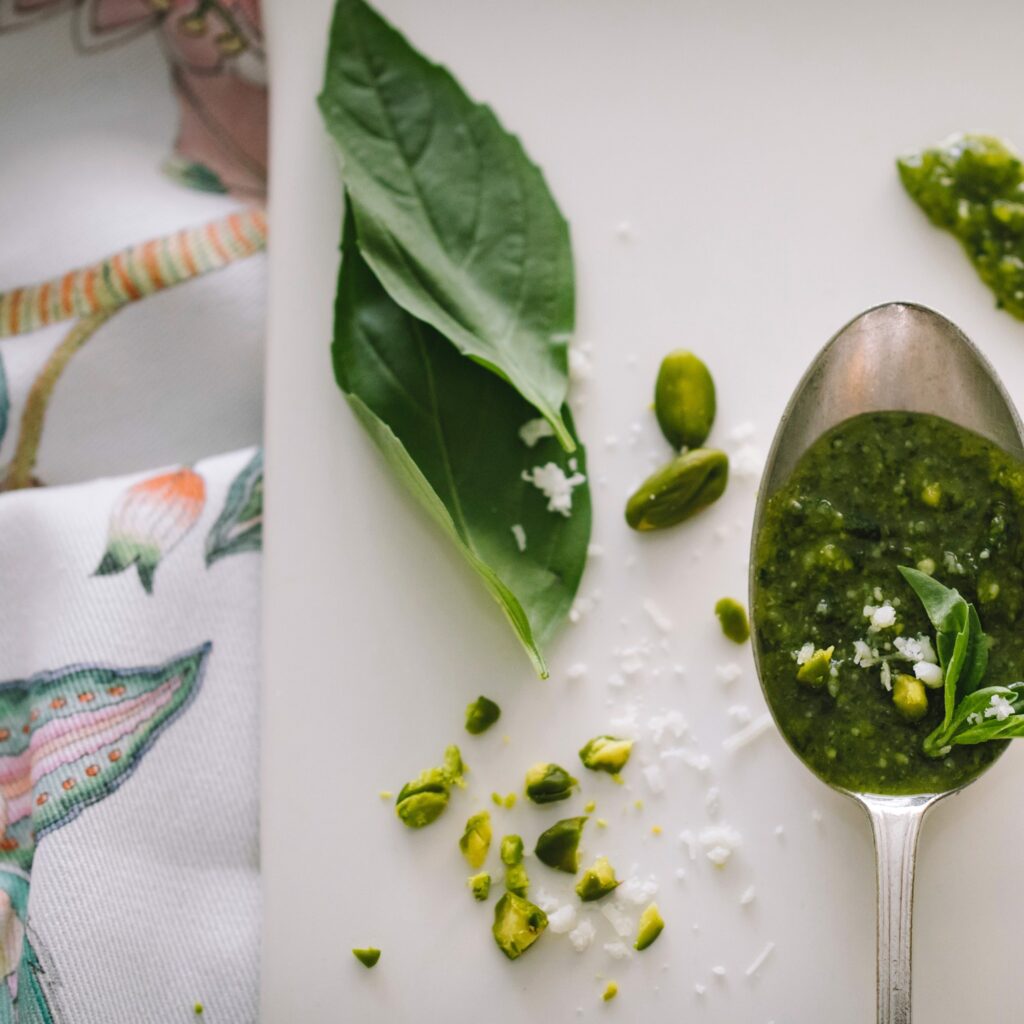 The king of Italian cheeses, Parmesan comes from the region of Emilia Romagna, and its inventors were Benedictine monks who needed a variety of cheese that could be stored for a long time. Parmesan cheese has been known in Italy since the 13th century. Giovanni Boccaccio mentioned cheese in the Decameron, and the French writer Moliere ate only Parmesan cheese over the years. And Italian soldiers were guaranteed 400 g of Parmesan cheese every day during the wars.

Made from cow’s milk, it matures for 1 to 4 years and can be stored for up to 10 years.

Parmesan Italians add to everything – pasta, pizza, salads, and sauces. The whole world adopted their love for this cheese. 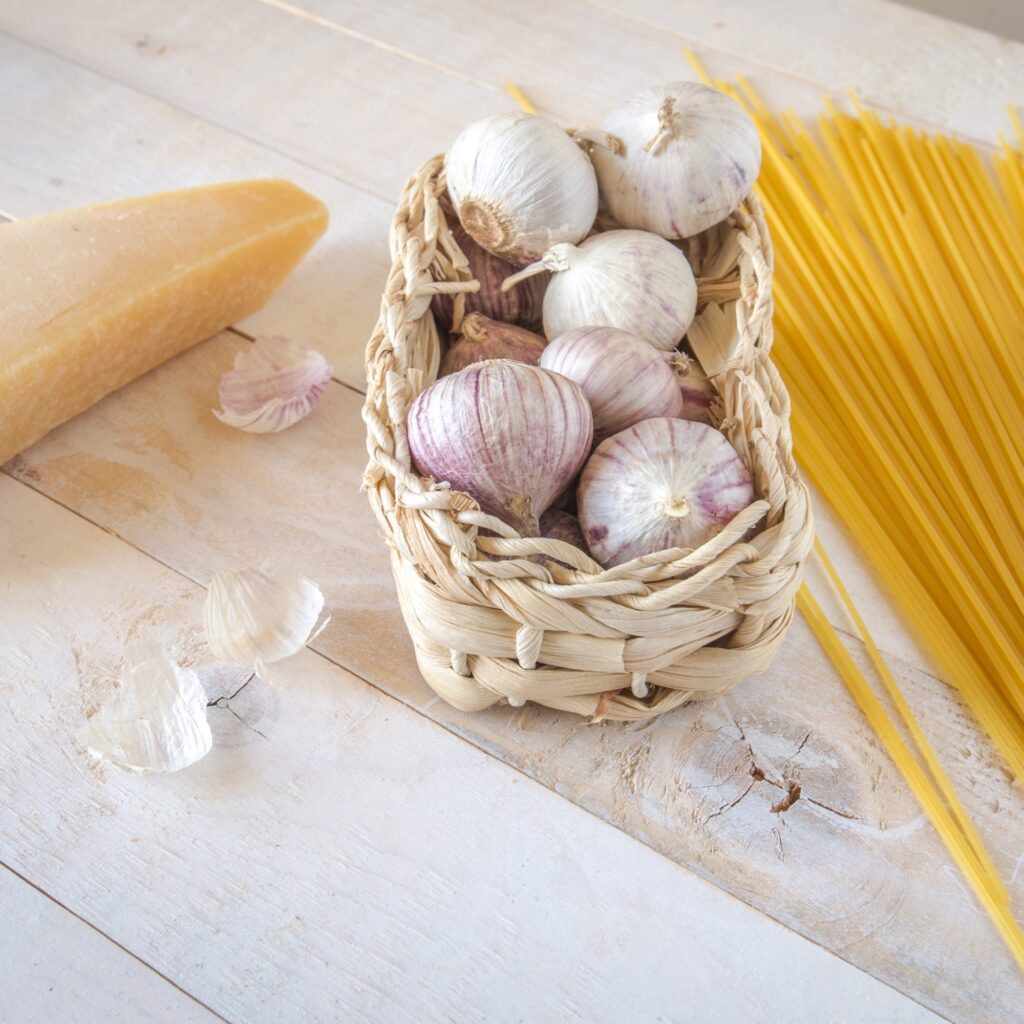 Italy’s favorite aperitif – spritz is made from sparkling Prosecco with the addition of liqueur, like Campari or orange Aperol, carbonated water (or tonic) and served with ice and discounts on oranges.

Spritz was invented in the 19th century when soldiers of the Austrian Empire stopped in the Veneto region. Because the soldiers did not drink hard alcohol, they diluted wines from local wineries with carbonated water – such as the “prototype” of the syringe.

Spritz is now one of the most popular drinks of Italians.

Tuscan wines are popular all over the world, but the most famous of them is Chianti. Produced in the Chianti region of the same name in the Tuscany region from the local Sangiovese variety. Red dry wine can be tasted by local winemakers, who have preserved the centuries-old tradition and culture of making this wonderful drink. Chianti is characterized as a branded wine – that is, it is produced only in a certain region according to a clearly defined technological process.

There are eight wine regions in Tuscany, the central one being the Chianti Classico. You can join a tour of the vineyards and taste wines from real masters of winemaking.

White truffles – mushrooms that grow in the ground in specific areas and at certain times of the year. Truffles are one of the most expensive ingredients in the world because they are very rare and difficult to find. The most prized truffles in Italy are white from Alba, Piedmont in the north. Here they are sold for thousands of euros. Every year in Alba during October – November is the Truffle Festival, where everyone can taste such valuable mushrooms. 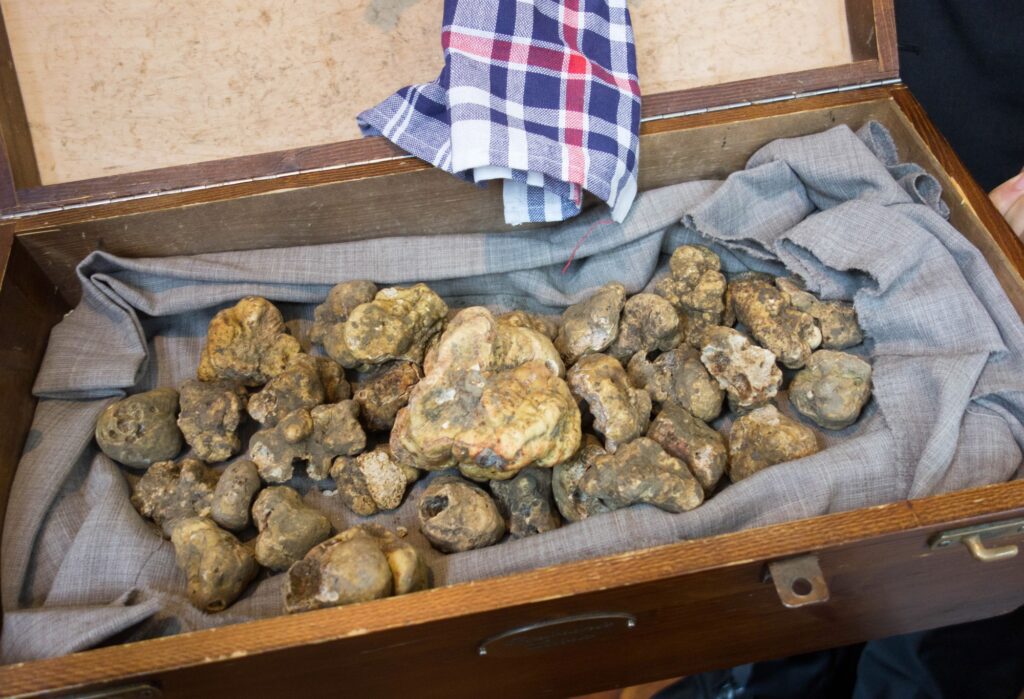 Anyone who has visited the beautiful Amalfi Coast or the Italian islands of Capri, Sicily, and Sardinia could not help but notice the giant lemons growing in the south. That is why another Italian drink is so popular here – limoncello. Italians soak lemon peels in alcohol and then mix with syrup. The taste of limoncello can vary depending on the addition of sugar, alcohol, and syrups. It is drunk chilled after dinner from small tall glasses, which are previously kept in the freezer to cover the glass with a thin layer of ice. 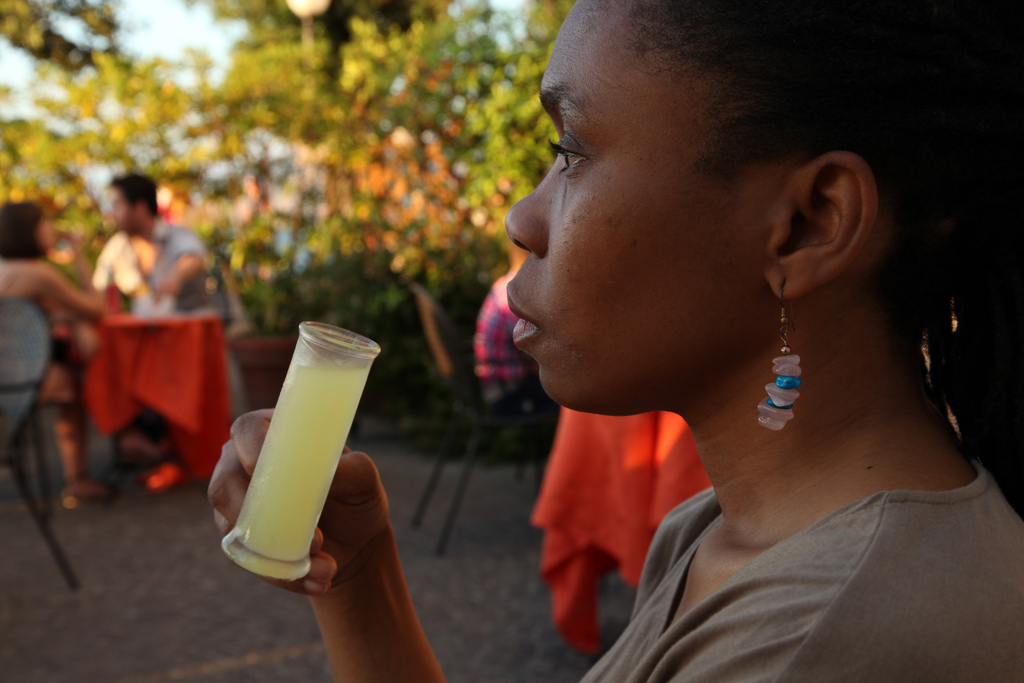