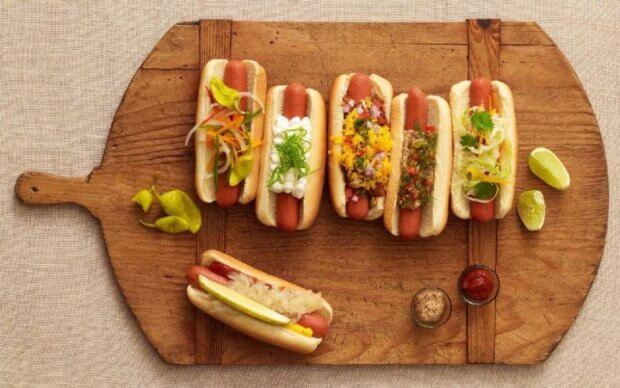 Put a hot sausage in a bun and add mustard was first guessed by an immigrant from Germany Charles Feltman in 1871.

He called his invention Dachshund, which translated from German means “dachshund”. Apparently, the popular name hotdog, which means “hot dog” – came from a long, like a sausage, a taxi, which also came to the United States from Germany. And the emigrant vein in the hot dog is rooted: in Canada, there is a Kubie – a hot dog with Ukrainian sausage, which is called kubasa.

In the 1930s, during the Great Depression in the United States, hot dogs were called “depression sandwiches” and sold for four cents apiece. In 1936, hot dogs became a real hit of street food and were sold across the country as the most popular product.

The largest hot dog in the world was prepared in Paraguay for visitors to the International Agricultural Exhibition. 245 cooks conjured it using a special gas stove. The product was 203.8 meters long and weighed 265 kilograms.

The most expensive hot dog in the world was prepared in the New York restaurant “Serendipity 3”. It costs $ 69. The length of the culinary masterpiece is about 30 cm, and fresh beef fried in truffle oil, a bun specially brought from Germany, foie gras with black truffles, Vidalia caramel onion, and exclusive ketchup and seasonings were used for making it. Due to scarce ingredients, hot dogs must be ordered within a day.

In Tokyo, you can try a charcoal black hot dog. It acquires such a radical color due to the fact that both the bun and the sausage are impregnated with squid ink.

Every year on July 4 in New York on Coney Island, the annual hot dog eating championship is held. The winner is the participant who ate the hottest dogs in 12 minutes. Record holder Joey Chesnat managed to eat 69 hot dogs in 10 minutes. Are you weak?

And the most famous hot dogs were eaten on July 21, 1969, on the moon by astronauts Neil Armstrong and Edwin Aldrin. However, before being sent into space they had to be sublimated and packed in special boxes and used with a spoon. The boxes, by the way, still lie on the moon with other debris.

The size of the US sausage market is estimated at $ 1.7 billion. The average American eats more than 60 hot dogs a year.

July 18 marks the unofficial holiday of the United States – Hot Dog Day. On July 18, 1957, the holiday was officially established by the US Chamber of Commerce.

Do you know how many calories are in a hot dose? Let’s count:

Together in a hot dose of about 500 kcal. If you think it’s not enough, you can drink it with cola.

By the way, in addition to “hot dogs”, there are also “cold dogs”, but they have nothing to do with hot dogs. Cold dog (German: Kalter Hund) – known in Germany, Italy, and some other countries, sweet pastries made of cookies and chocolate cream.