The lion, the progenitor of the animal kingdom, is a beautiful feline recognized for its elegance but also for its popularity in the world of tattoos.

A lion tattoo is often seen on the skin because many choose this wonderful animal to decorate their body. In this article, we will analyze the various meanings that this feline represents in various cultures.

The lion is rich in symbolism, related both to its regal and courageous nature and to its strength. Loyalty and energy are two other elements that characterize this magnificent animal that makes the protection of its family another boast.

The lion is a particularly social animal; it lives in flocks, usually made up of two males and six females who raise the young and hunt to feed the group. For the latter reason, women very often choose to have lionesses tattooed to represent attachment to family and their children. But now we are going to analyze in detail the specific meaning for each culture and tradition. 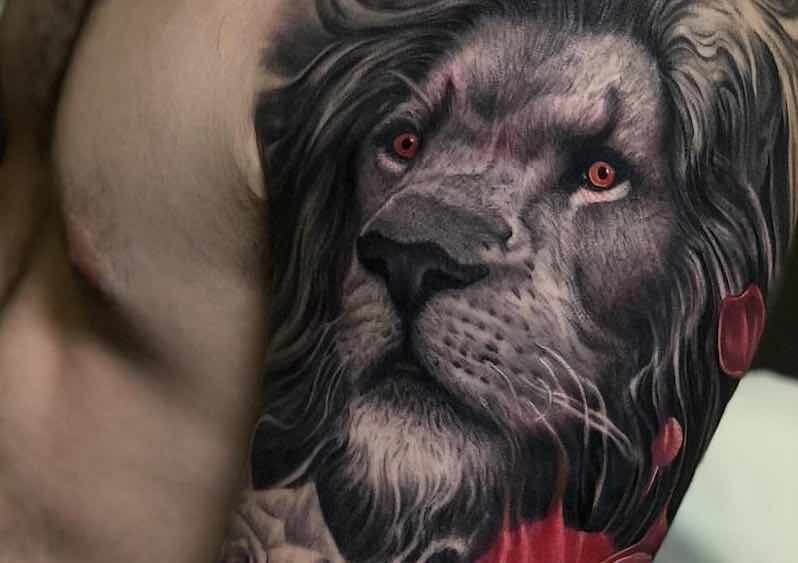 The lion represented love, strength, and virility both in Ancient Greece and in Ancient Rome.

This religion usually compares the power of the feline to the divine justice of its God.

The situation is different for one of the most widely adopted religions in South Asia; the lion, in fact, symbolizes safety and wisdom.

Karashishi is also known as a Chinese lion or lion-dog; it is an animal full of symbolism and is particularly appreciated by lovers of Japanese tattoos. It represents wisdom, balance and expresses the duality of life.

Tattoo with a lion in our days

The most popular design is definitely the lion’s head; emphasizing some aspects or expressions of the feline represents the desire to place an emphasis on the choice of one’s tattoo. An angry lion, perhaps showing its sharp teeth, symbolizes ferocity but also strength and courage.

As pointed out earlier, the lioness represents love for family and motherhood and is the reason why many women choose her, but not only. Many men choose to tattoo the female feline to pay homage to their mother, but also to emphasize the desire to fight for their little ones.

Representing the lion in a tribal style, especially the Maori one is a usual choice for aficionados. Following another “child” design of the tribal one, in recent years many customers have chosen to stylize the feline on their skin, following the fashion of blackwork that provides a tattoo without backgrounds and represented with continuous lines. What better way to amplify the feline’s spirituality in association with a tattoo? A mandala! Geometric diagrams are closely related to mysticism. This association generates aesthetically highly appreciated tattoos by women and men.

The lion, in particular its head, is also well suited for small tattoos, despite its grandeur (some specimens reach 250 kilograms). However, lovers of minimal tattoos must pay attention to the artist’s choice because small tattoos tend to get damaged over time. Finally, for lovers of non-binding tattoos, the lion is also suitable for drawings in the form of a cartoon. Simba from The Lion King is the most popular choice.