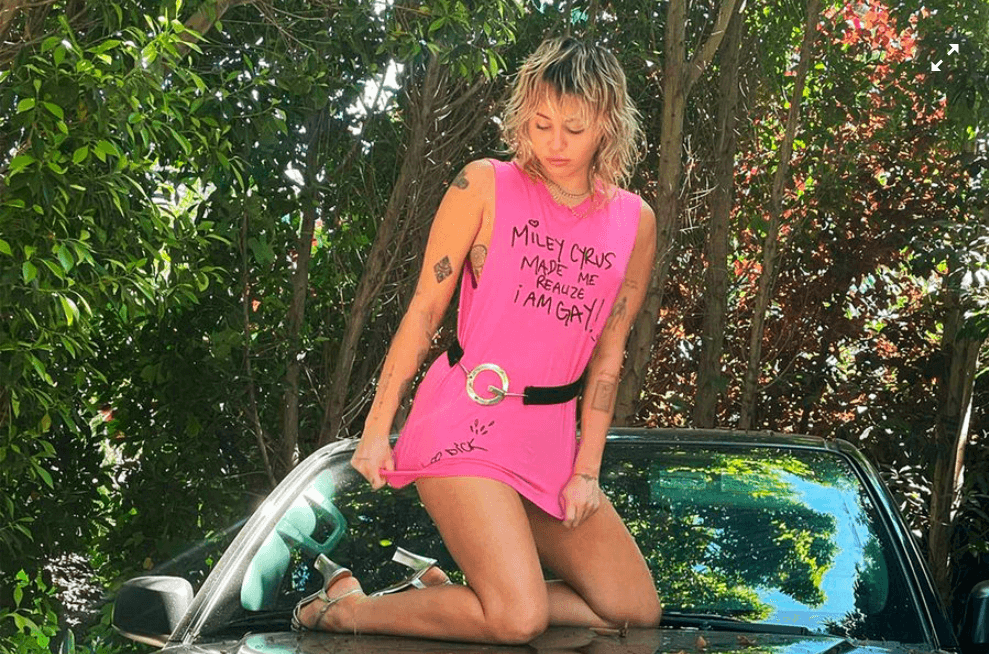 The singer shared her new provocative merch with fans on social networks. But not all Miley Cyrus fans understood her next trick.

Miley Cyrus continues to play a real rock star and shock fans with her actions. This time, the 28-year-old singer presented new T-shirts in bright pink with the words “Miley Cyrus made me realize that I am gay” and many drawings referring to the love of male genitals.

Only provocative phrases were not enough for the performer. She climbed on the hood of her father’s car and arranged a photo session in defiant positions.

Miley’s new T-shirt can be purchased for $ 35 on her website, and she promised to send part of the proceeds from sales to support the charity Happy Hippie, which helps the LGBT community and young people who have been left homeless.

Cyrus’ post on the web drew a mixed reaction. “I love the concept of Miley’s new T-shirt, but this design is disgusting,” “I think you’re too old for this,” “Miley, just get out of the car,” her subscribers wrote.

Kim Kardashian’s friend, Paris Hilton, also miscalculated with the business idea. She released scrapbooking – a set for making and decorating family photo albums. The singer has never been a fan of handicrafts, so even her fans were not interested in these products.

And Paris’s colleague in the shop, Marilyn Manson, decided to share his love for absinthe with the world by releasing an alcoholic drink called Mansinthe. Critics did not approve of the musician’s project and compared the smell of the liquid with “sewage, swamp mud and technical alcohol.” The artist defended his drink as best he could, but in the end, he was forced to stop producing it.

Who’s worth learning about presenting strange products is Gwyneth Paltrow. She managed to make vagina-scented candles a bestseller. Buyers were not embarrassed by either the description of the product or its price – $ 75. However, some were unhappy with the quality of the products. Texas resident

Colby Watson is suing Goop, the actress’s company after a candle exploded at his home. She was allegedly engulfed in a strong flame, and she left a “black round spot” on the table, and the jar itself was charred. Representatives of the company called the appeal “frivolous.”