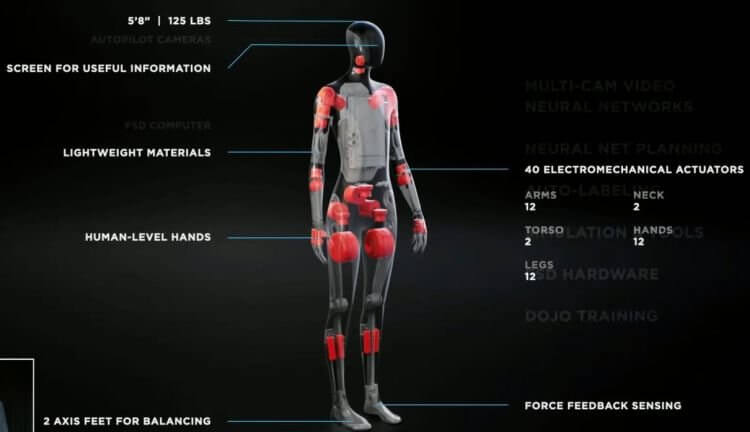 By next year, Elon Musk at a recent event promised to demonstrate a prototype of a humanoid Tesla Bot that will share hardware and software with the brand’s electric vehicles.

Of course, the development of the robot’s actuators will have to be taken seriously, and therefore Tesla has already begun hiring specialists in the field of robotics. Recall that the design of the Tesla Bot in its current form implies the presence of forty actuators, and more than half will be concentrated in the hands and arms. With a height of 173 cm and a mass of 57 kg, the robot will be able to carry loads weighing up to 20 kg, although it will be able to hold no more than 4.5 kg with outstretched arms. The limbs of the robot, including the feet, must have a force feedback function, which will allow it to be trusted with sufficiently delicate operations.

As noted by Electrek, on the Tesla website, you can already find advertisements for the search for specialists in the field of robotics, mechatronics, and simulation. Tesla describes the functional purpose of the humanoid robot, which is to be developed by specialists, rather sparingly – it will have to perform monotonous and tedious operations in production. Apparently, in the first stages, Tesla will try to introduce robots in its own car assembly plant, although for this they could not be made like people.

Tesla will require powertrain specialists to create electromagnetic motors with the highest power density in the industry. The maximum carrying capacity of the robot, recall, should be 68 kg, and moving on two legs, it will be able to reach speeds of up to 8 km / h. At the same time, Elon Musk emphasized during the Tesla Bot presentation that the robot being created should be weaker and slower than a person so that in the event of any malicious actions on its part, it does not pose a real threat to the life of the latter.