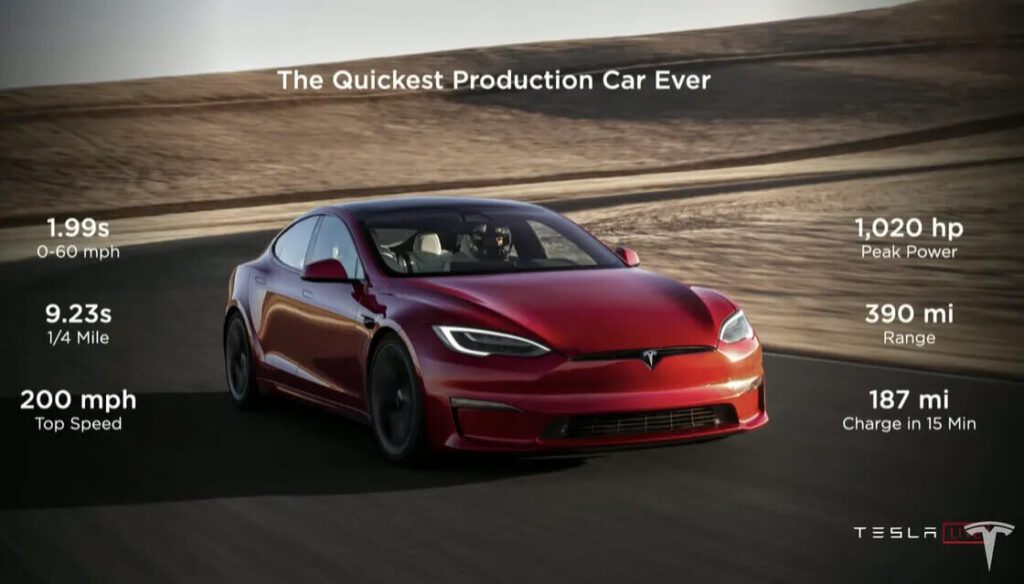 The Tesla Model S Plaid electric car can accelerate to 100 kilometers per hour in just over two seconds. On one charge, it can travel approximately 630 kilometers.

The head of the Tesla company presented a new version of the famous Tesla Model S – Model S Plaid. A distinctive feature of the novelty is its exceptional “agility”. The car accelerates to 100 kilometers in two seconds. The maximum speed is 320 kilometers per hour. Tesla Model S Plaid recharges in 15 minutes, while one charge is enough for 630 kilometers.

The interior has undergone changes. The salon received two touch screens with which you can control the car’s systems. The 17-inch front display is ideal for movies or games. There are several charging modules for smartphones and other gadgets. The developers have confirmed the AMD graphics with RDNA 2 architecture, providing the processing power of the PlayStation 5.

The price of the novelty is 130 thousand dollars (approximately 9.3 million rubles). Customers have already received the first copies, and within a week they have to deliver several hundred more of these cars.

The Model S line can be called a landmark for the Musk company. The prototype was first shown at the Frankfurt Motor Show in 2009, and deliveries to the United States began in 2012. In the first quarter of 2013, 4,750 Tesla Model S units were sold in the United States, making the model the best-selling luxury sedan. By the end of the first quarter of 2014, about 32 thousand Tesla S had been sold worldwide.

Byautoinsurance.com recently evaluated the U.S. electric vehicle market over the past three years. As it turns out, three-quarters of all zero-emission vehicle sales came from various Tesla models. More than half of the market was in the Model 3 budget sedan.

Later it became known that Lucid Air overtook the Tesla Model S in drag distance. The top-end Dream Edition car covered the distance in 9.9 seconds, while the Tesla couldn’t keep up with the 10-second interval.