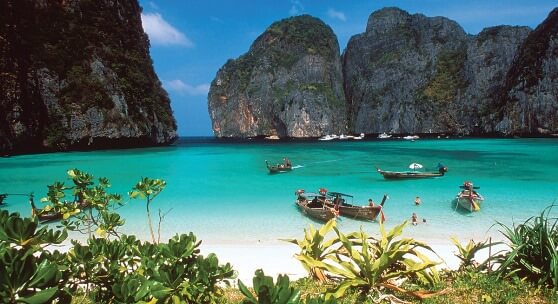 Thailand is one of the countries that repeatedly celebrate the main holiday for many.

The festivities are arranged three times:

Thus, the year 2562 comes in the kingdom on the night of December 31, 2018, to January 1, 2019. However, the tradition typical of Europe, Scandinavia, CIS countries was adopted in Thailand not immediately, but only in 1940.

Earlier, the beginning of the 12-month cycle was dated April 14, and the holiday was called Songkran. The date, as you can guess, is not accidental. The fact is that the Buddhist calendar was influenced by lunar cycles. Leap years occurred every 19 years. Each such year increased by a month. In addition, an additional 11 days were added every 57 years (19×3). The role of counting was given to the monks.

At the end of the first half of the twentieth century, the system was significantly simplified. The New Year was postponed to January 1. And today the calendar of Thais is almost no different from the European one.

The ceremony of meeting the main holiday of winter is considered family. Residents of the kingdom exchange gifts, visit. But in tourist areas, the holiday has a different character and is celebrated on a large scale. Although Songkran has remained a red date on the calendar, it is no longer a holiday.

Tourist attraction before a trip to Thailand

TO AVOID TROUBLESHOOTING BEFORE THE TRIP, WE RECOMMEND YOU READ SOME IMPORTANT RULES IN OUR OPINION.

Never touch people’s heads in Thailand. In Thailand, Buddhism is practiced, according to their notions, there is a chakra, it is better for strangers not to touch it.

In Thailand, snatching bags, removing gold chains (especially loved in fat fats) from a motorcycle while driving – are very common. Don’t put yourself at risk.

If you met a girl – control the drink, and even better – do not drink. Close line is used very often here.

Always remember that in Thailand, the Thai is always right. Even if you call the tourist police in case of a conflict or incident – you will still be wrong. It is easier not to bring to the police.

If you rent a motorbike, jet ski:

Never pledge your passport.
Take a very high-quality video of a rented bike or jet ski. To prevent this from happening, “you scratched my bike, pay the money.” For many, this is their main business.