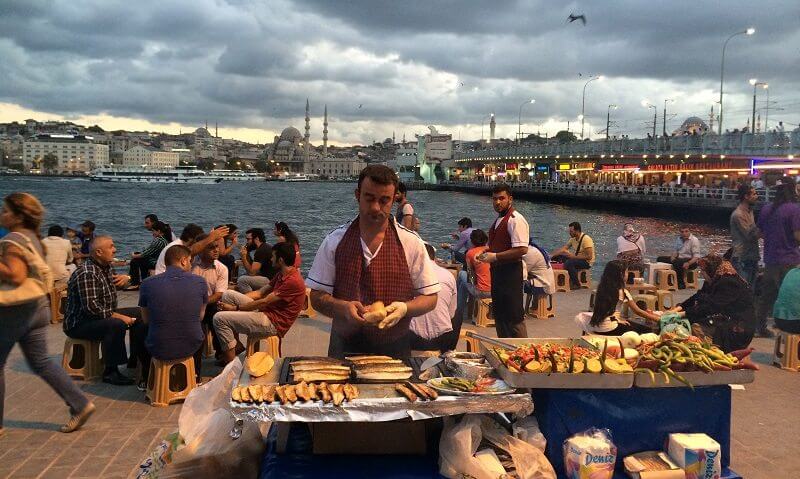 Many of us are afraid to buy food from trays, considering its quality is quite questionable.

However, in some cities around the world, you can eat on the street in complete peace, moreover, sometimes there you can find real delicacies! We present a geographical guide to the most delicious street delicacies in the world.

The main dish of Berlin, which can be eaten on the go (as, incidentally, any other German city) – sausages. They are usually served with bread and sauces in the manner of a hot dog, but is it possible to compare them with this primitive creation of the American mind? In Germany, different sausages are preferred in every city: they can be sharp and not very, thin and very thick, very fried – almost crispy or tender. It remains only to express regret that in recent decades, traditional sausages from the German streets are gradually being replaced by Turkish-Arabic kebabs and shawarma.

Indecent and a little pretentious Brussels love to eat on the street. Locals can not indifferently pass by the tents where french fries are sold, and the Belgians claim that they invented this dish. Usually, fried potato sticks are placed in a paper envelope, not forgetting to slap a spoonful of mayonnaise on top. And tourists prefer to buy on the streets waffles with cream, strawberries, nuts, and a couple of dozen fillings, while Brussels prefer just waffles with sugar.

In Palermo, no one will look askance at a person who eats on the go, because Italian cuisine is so beautiful that you can eat it continuously. And Sicilians are not limited to any one dish, on trays with dishes con le mani you will have a full lunch: potato croquettes (crotch ^), deep-fried chickpeas (panelle), deep-fried rice balls with different fillings (arancini). You can have a sandwich with beef spleen or a wonderful sfinciuni – onion pie (usually sprinkled with cheese).

Today, Turkish doner kebab can be found in any European city, but in Istanbul, the street menu is much more diverse. Luminous bagels with sesame (simit) are sold all over the city, there are trays made of hawk börek – products from a layer of dough, you can also eat kumpir – baked potatoes stuffed with various fillings from banal ketchup to pickles and sausages. And you should drink everything with freshly squeezed orange, grapefruit, or pomegranate juice, which is also sold on every corner.

In any of the local markets in the middle of the trays filled with tapestries, hookahs, ceramic dishes, there are always a few counters with local meat dishes and various cereals, generously seasoned with spices. The largest selection of street food in Marrakech is in the main square of Djemaa el Fna, where large trays of snails are adjacent to pots filled with seafood, fragrant-smelling vats of lentil soup , all surrounded by giant bags of dried fruit and

During lunch and dinner, a number of trays with all sorts of exotic dishes are lined up on most streets of the Thai capital. Just do not be afraid: no one forces you to eat cockroaches and blacksmiths popular in these places. It is possible to be limited to usual noodles or rice with various additives or any barbecue (from beef – Nua, chicken – kai, or pork – moo). Do not forget to ask to pour you a bowl of appetizing soup, and for dessert buy fried bananas or coconut pudding (Khanom Krok).

Shanghai is another city where you can enjoy a penny of street food. You should be careful, but more because you may come across something incredibly sharp. On the trays, you will see hundreds of dishes from bean and crab cakes to baked sweet potatoes, but most often you will find dumplings with both meat and vegetarian fillings.

Of course, when you think of Mexico City, you immediately mentioned this, but the Mexican capital is preparing many surprises. Snacks (antojitos), such as fried corn (elotes) or long-lasting corn diapers with all sorts of fillings, are mostly sold here. Food tents can be found all over the city, especially many in the center, in the lively Mercado San Juan markets in the Cuauhtémoc and La Merced districts of the same district.

In Chicago, the artisanal food trade is officially banned, so all sellers work semi-legally – in special vans, but it does not make the food less delicious! There are many such food outlets, so if you find yourself in this city, you can always quickly, deliciously (and most importantly – safely) eat small meatballs mobile or southern mac & cheese – a cheese sandwich.

Apparently, nowhere is there such an assortment of street dishes as in the multinational New York, which mixed the traditions of dozens of peoples. Here you will find thousands of typical American hot dogs, Turkish kebabs, German pretzels. Schnitzels have recently become popular and meatballs are sold from mobile vans. Street food in this city has become a real attraction – there is even a special tour dedicated to what and where to buy in trays.