Skip to content
Home About All The Parable of the Solomon’s Ring: “Everything Passes and It Will Pass” 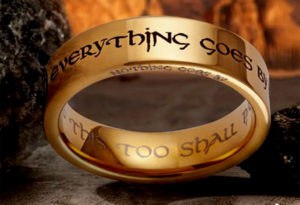 After ascending the throne, Solomon took an oath in which he promised his people justice and the wisdom of government.

But, having a completely emotional character, the young king often, being in joy or anger, did not make quite the right decisions. Then, remembering his promise, he turned to the court sage, asking for advice and help with curbing the feelings that were stirring him up.

The sage gave the ruler a ring, which was to save him from excessive experience. It was enough to just look at him to calm down and control his anger. Solomon accepted the gift and put it on his finger. One day, during an attack of despair, he, remembering the ring, began to examine it closely and found the engraved words:

“Everything passes and it will pass”, which calmed him.

Turning his thoughts back to the past, he realized that the feelings of anger, resentment, sadness that had previously gripped him, sooner or later really passed and were forgotten.

There are also happy moments. After all, moments of admiration and fun are sometimes replaced by sorrows and sorrows. Gradually, Solomon learned to treat any changes correctly. A ring with a wise inscription began to rescue him in difficult moments of life. Indeed, if you think about it, everything passes.

One day Solomon, who was confident of his own peace under any circumstances, was still angry. He was ready to throw away the gift of the sage, but suddenly saw the words already written inside the ring:

Surprisingly, the king had not seen this inscription before. And again calm and balance came to him. Until the end of his life, the ruler did not part with the ring, constantly considering the priceless gift and thinking that everything in this world passes, including his life path. But suddenly he saw a ray of the sunshine slide along the edge of the ring, irradiating a slightly noticeable inscription: