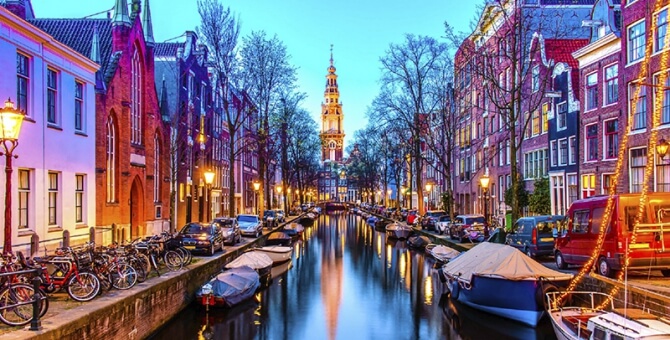 Streets and avenues are the places that best reflect the identity of cities.

Streets with colorful shops, historic buildings, museums, and famous cafes are the focus of tourists and residents. For example, you can’t imagine Istanbul without Istiklal Avenue and Paris without the Champs Elysees.

Heerstrasse in Bonn is known as Cherry Blossom Street or Sakura Street. The spread of photos of trees planted in the 80s on social networks makes the city more popular. Dozens of tourists flock to the region to take pictures of the pink Japanese cherry trees that cover the entire street in the spring. On this fabulous street, photographed thousands of times in March and April, there are second-hand shops, antique shops, and stylish restaurants. The sakura blossom festival is held on the street every year. When visiting Heerstrasse, one of the most beautiful streets in the world, do not forget about the nearby Beethoven House.

Premier Street, one of the romantic and lovely streets of Paris, was built in the late 19th century to house workers. The street, formerly renamed, was renamed Premier in honor of French politician Adolphe Premier, who lived here for some time. Locals paint the street buildings in pastel colors, creating a cozy atmosphere here, despite the predominant gray color in the city. Three-story houses on both sides of the 144-meter street are built in a typical English style. For this reason, the street is known as Little Britain. The street is a 30-minute walk from Notre Dame Cathedral in Paris and 10 minutes from Place de la Bastille.

This is one of the most beautiful streets in the world, perhaps a favorite place for lovers of history and archeology. The street, which houses the most important historical buildings of the city, including the Roman Forum, was built in 1924-1932 by the order of dictator Mussolini. The best time for a pleasant walk along the Via Dei Fori Imperiali, which is located next to the Colosseum on one side and the monument to Vittorio Emanuele on the other, in the early morning hours and sunset. At this time you can see and display the mesmerizing landscapes of the ruins, illuminated by the sun.

Petit-Champlain, Canada’s oldest shopping street, is impressive at any time of the year, but in winter, especially at Christmas, it is the most beautiful place in the world. When the snow covers the entire city, which is decorated with thousands of lights, 400-year-old buildings look like gingerbread houses. For this reason, the best time to visit this place is from late November to mid-February. Every country, city, the state has cultural differences. One of the things that helps every tourist to feel this cultural difference is walking through the streets of this country.