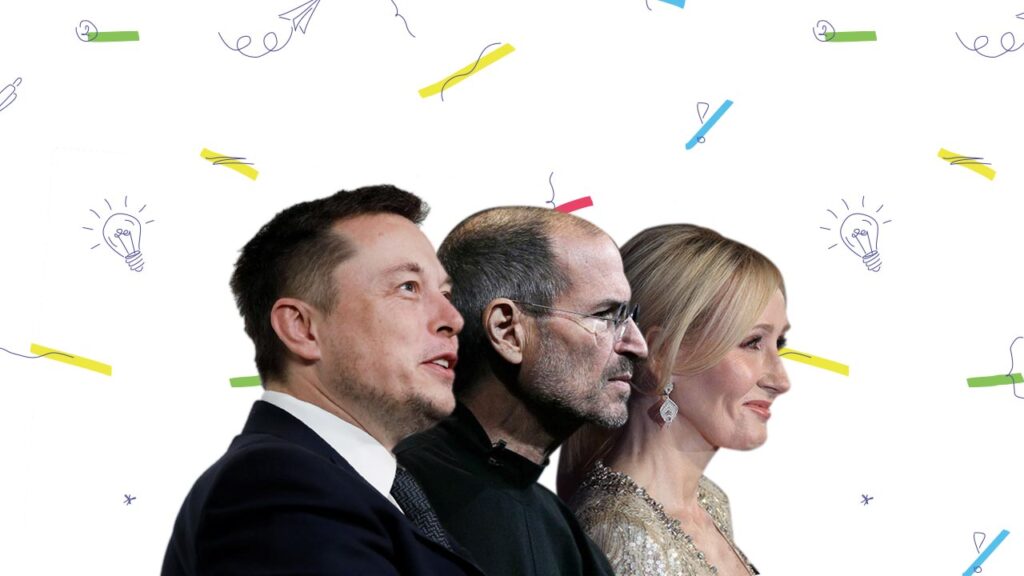 If you are going to become an entrepreneur, you will face failures and setbacks in any way. The way you deal with them and show what you are worth. Will you be able to achieve what you want? Will you finish the job? And will you become a real business shark!

Read about the terrible word “no”, which could not prevent the legendary success.

There is no doubt that Jobs is a symbol of modern technology. But sometimes Steve’s colleagues did not like his authoritarian leadership style. He did not come in so much that in 1985 Apple’s board of directors fired him from his own company. But unfortunately for them, he founded another company, which was also engaged in the production of computers and writing software for them, and its name was NeXT (symbolically, right?).

He also bought the Pixar animation studio. In 1997, to get out of the crisis, Apple decided to buy NeXT and bring Jobs back. We have known him ever since as the “father of the digital revolution.” In one of his speeches, Steve Jobs said that the period without Apple was very successful for him. “I didn’t understand it then, but the fact that I was fired was the best thing that could have happened to me. The difficulty of success has been replaced by the ease of a beginner who is unsure of anything. That’s how the most creative period of my life began. ”

In 2016, the author of Harry Potter shared on Twitter the toughest rejection letters of her career. One of them concerned the first book about Harry Potter, which, by the way, was rejected as many as 12 times. Another letter concerned a series of books about Detective Cormorant Strike, which she wrote under the pseudonym, Robert Galbraith. Anonymity took all the trump cards of her famous name from Rawlings. But she did not relax. “I wasn’t going to give up until every publisher sent me. I had nothing to lose and it added courage. ” In the end, the book was published by Sphere Books. Prior to the discovery of Joan Rowling, 1,500 paper copies of the book and 7,000 electronic copies and audiobooks had been sold since April 2013. The book rose from 4709 places to first in the sales rankings of Amazon when it became known about its true author, and sales increased by 156866% in one day.

It seems that the whole success story of this man is full of failures. A failed attempt to get a job at Netscape, the dismissal of the CEO of PayPal, the refusal to sell rockets for the aerospace business of Ilona – many obstacles for the young entrepreneur. But it is interesting that after each such failure, Mask managed to achieve great success in something else. After Netscape, he opened his first business – Zip2. PayPal was followed by Tesla, SpaceX, Neuralink, and The Boring Company. Now Elon Musk is facing new problems at Tesla and explosions of its rockets. Traditionally, after the fiasco, we expect the triumph of Mask. Probably, Ilona’s grandmother often told him as a child: “Don’t be afraid of your granddaughter, after the rain there is always a rainbow!”

It’s amazing how often she stumbled and how it helped her become mega-popular. After working as a nightly news anchor in Baltimore and suffering humiliation from a colleague, Winfrey was fired. Her next attempt to become a presenter also failed. Oprah listened to a lot of insulting comments about her work at that time. Despite this, she believed in herself and later decided to launch her own talk show “The Oprah Winfrey Show”, which lasted on television for 25 years (for comparison, Santa Barbara went on TV – 9 years). The Oprah Show is still considered the most successful daytime talk show in the history of American television. Winfrey believes that it was the negative experience that made her the unique person we know.

He is one of the richest people on the planet, googled if you do not believe :). Buffett became a legendary investor so long ago that it seems as if everything has always gone smoothly for him. Warren, 87, still remembers his dream, which never came true. He wanted to study at Harvard as a child. But upon entering Buffett’s abilities were underestimated and he was denied. However, this did not prevent Warren Buffett from becoming a pro in his field. He founded the holding company Berkshire Hathaway, in which he is the largest shareholder and CEO. Thanks to his business abilities (which were once underestimated by Harvard), he earned 90.3 billion greens (as of 2018) and was nicknamed the “Sage of Omaha”, and in 2008 was recognized as the richest man in the world.

A real estate tycoon and investor, whose career also did not start very well. At the age of 29, she betrayed her boyfriend, who was also the co-owner of her first business. A little later, she was defeated as a candidate for a judge on Shark Tank (a program where judges select the best startups for further investment). Then Barbara took a risk – she sent a letter to management about how much she would lose the TV show without her. Corcoran wrote that she is always happy after she is denied something, so she considers their refusal as a good sign. Guess who was hired as a judge on Shark Tank?

It’s hard to believe that the founder of Amazon once had dark times. At the beginning of the firm’s life, investors were very skeptical about whether it would ever be worth anything. And Bezos needed $ 1 million to promote the company, didn’t he? Everything could end without even beginning. We had to hold 60 meetings. And he raised the entire amount from 22 investors, most of whom asked Jeff, “What is the Internet?” Despite the refusals, Bezos still managed to launch the world’s largest online bookstore, which later grew into a mega-corporation with an estimate of $ 768 billion.

She was the most famous woman on Wall Street, Sally worked in the American financial corporation – Citigroup. But in 2008, she was publicly fired after defending her clients in the midst of the financial crisis. In all fairness, after a three-year investigation into Citibank’s fraud, the corporation was ordered to pay $ 14 million, which is “temporarily used” from 53,000 customer accounts over the past eleven years, as well as another $ 4 million in interest and fines. Sally is convinced that the fact that she was a woman in a high position, which was a bad 2008, also played a significant role in her dismissal. This, in her opinion, caused outrage among many colleagues. But Kravcek only benefited from this, because she founded an investment platform for women Ellevest. “The biggest risk in a career is not taking risks at all. You have to constantly direct yourself in different directions so that life does not fly past you, ”says Sally.

Therefore, after receiving another “no”, remember these people and remember what they have achieved. But now you have three YES from like U and the next step to success is a notebook because we believe that there is only one notebook between goals and actions!